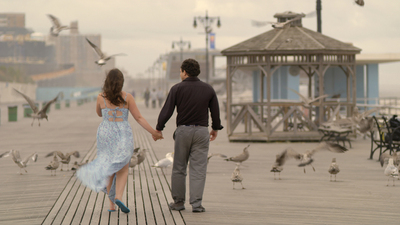 BEING DIFFERENT ISN’T A HINDRANCE TO ALSO BEING JUST LIKE EVERYONE else in Keep the Change – a lesson that David, a grown man with autism, finds difficult to accept throughout the course of this empathetic romantic comedy. Charting David’s budding romance with Sarah, writer-director Rachel Israel’s film embraces its characters’ uniqueness while using a standard-issue romantic comedy template to underscore that, beyond their issues, they’re a familiar pair. The film is an ode to self-discovery and acceptance that’s as funny as it is sweet.
Adult autism is rarely discussed in the open, causing many people to shrink away from what they suspect is a dark, mysterious and troubled disorder of the mind. Not in this case. Sunny, profoundly humane, endearing and enormously sympathetic, Israel’s film shows her characters to be not that very different from the kind of people one meets every day on the street. Granted, they may seem at times quirky, annoying, a bit too outspoken, and not always accommodating, but then, who isn’t, at times?